It has been estimated that 23 million Yezidis have been killed by Muslims and their other self-proclaimed enemies during the past 700 years.  The Yezidi population continues to decrease.  Just 200 years ago, it was 2 million. It is now estimated to be less than one million worldwide.  A current “incentive” to the ongoing slaughter is a belief that states that if a Muslim slays a Yezidi great awards await him or her in Heaven.  If a Muslim man slays a Yezidi he is told that he will be rewarded with 72 virgins in the next world.  Unless such “incentives” cease and this senseless killing is stopped the Yezidis could face permanent extinction.  If this happens, the world will not only lose a very peaceful and unbiased people, but an irreplaceable link to its past.  The Yezidis, who originally migrated to Iraq from India, are currently the caretakers of the oldest religious tradition on Earth.

Vian Dakhil, a Yezidi Parliament Member, collapses in tears as she begs the Iraqi government  to intervene in the genocide against the Yezidis.

A slaughter of the Yezidis occurred in April, 2007, when 23 of them were murdered by Kurdish Muslims. In August of that year, four trucks driven by fanatical Muslims and laden with explosives were driven into the Yezidi town of Sinjar and detonated. Eight hundred Yezidis lost their lives in the attack and another 200 were gravely injured. Two hundred Yezidi children lost both parents and became orphans. But this is not the most recent attempt at Yezidi massacre by Muslim extremists.

Following video shows part of the attack on Yezidis in 2007.

The lady shown at 1:27 mark is crying that there is no one left in her family.

Saddam Hussein instigated a pogrom of Yezidi extermination by labeling them “Devil Worshipers” and thereby triggered whole scale  of persecution by the Iraqis. Throughout the Middle East it was no secret that Saddam Hussein’s goal was systematic cultural genocide of the Yezidis. Under his savage regime the Yezidis were uprooted from their villages, their farmland taken, and they were denied both jobs and medical care. Approximately 250 Yezidi villages  in the Sinjar Mountains were destroyed, and the river Dejela, which supplies the Yezidi communities with drinking water, was contaminated with poisons. All the sacred sites of the Yezidis were vandalized and threatened.

Although this pogrom was lifted briefly following the US invasion and Saddam’s capture, the harsh conditions appear to be returning. Kurdish Muslims are currently blocking food supplies to the Yezidi villages and they continue to prevent the Yezidis from cleaning up the poisons in their water supply. Yezidis can not visit their relatives in many villages which have become Muslim controlled, and those Yezidis moving between villages risk both torture and death. Within the mosques adjacent to the Yezidi villages mullahs continue to speak about the “Devil-worshipping Yezidis” and encourage their conversion to Islam or murder.

630 AD. The Muslims started a series of wars against the Yezidis by killing and abducting many people.

637 AD A major war was instigated against the Yezidis, and then Muslims burned and destroyed much of their territory.980-81 AD Islamic Kurdish armies surrounded the Yezidis living in the Hakkar region. They promised the Yezidis mercy if they surrendered to them but failed to keep their promise. Instead, most of the Yezidis were massacred. Those who survived were forced to convert to Islam.

1107 AD About 50,000 Yezidi families were destroyed during a period of Muslim expansionism.

1218 AD The Mongols under the leadership of Hulagu Khan reached the Yezidis and slaughtered many of them, but the Mongols met strong resistance from the Yezidi warriors and eventually retreated..

1245-52 AD Hulagu Khan’s armies resumed their battle against the Yezidis and slaughtered thousands of them.

1254 AD A conflict occurred between the Muslim Bader al-Din Lolo, the “Mayor of Mosul,” and a Yezidi leader named Sheikh Hassan. Bader al-Din’s men captured Sheikh Hassan, executed him, and then hung his naked body on a Mosul gate where it could be seen by many other Yezidis. This event led to a war which the Yezidis lost, forcing them to flee to the mountains and leave behind their lands, villages, and temples. Everything the Yezidis left behind was destroyed. Even their most sacred shrine at Lalish was desecrated, with the bones of their greatest saint, Sheikh Adi, being taken from his tomb and burned in front of the unbelieving Yezidis.

1414 AD A Persian leader named Jalal al-Din Mohammed bin izidin yousif al-Halawani led an armed force against the Yezidis who were living in the Hakkar Mountains. His raid was supported by Kurds in the area. Most of the Yezidis descended from Sheikh Adi’s followers were killed, and the remaining bones of Sheikh Adi were taken from his tomb and burned in front of Yezidi hostages.

1585 AD A Kurdish leader named Ali Saidi Beg from Botan province attacked Yezidis living in Sinjar and killed more than 600 of them. The Yezidi women were abducted and raped by the conquerors in front of the Yezidis’ captured soldiers.

1640-41 AD Yezidi villages near Mosul were looted and other Yezidi villages were attacked by Ahmed Pasha, a Turkish Muslim Ottoman governor, along with 70,000 armed soldiers. Hundreds of thousands of Yezidis were killed.

1648 AD The Yezidi Sheikh Merza revolted against the Ottomans controlling Mosul who had previously beheaded his two brothers. The Ottoman general Shamsi Pasha was then summoned from Turkey to attack the Yezidis. Many Yezidis lost their lives and Sheikh Merza was beheaded.

1715 AD Hassan Pasha, the Ottoman governor of Baghdad, attacked the Yezidis with a huge army in order to punish them. Those Yezidis who were not killed were forced to flee into Syria. Pasha made an alliance with the local Arabs and then continued to attack the Yezidi unmercifully.

1743 AD The Persian leader Nadir Shah guided his troops into Yezidi territory near the Zab River, about 30 kms west of Mosul. They looted the villages and captured most of the Yezidis as hostages. Those that refused to obey were instantly killed.

1752 AD An Ottoman pasha named Sulaiman Pasha attacked the Yezidis in Sinjar. His campaign of killing and looting lasted two years. Three thousand Yezidis were killed and 500 women were taken as hostages.

1767 AD An Ottoman pasha and mayor of Mosul, Amin Pasha, had his son lead troops against the Yezidis living in Sinjar. He demanded the Yezidis to bring him 1000 sheep. When they brought only 800 he ordered his men to slay a large number of Yezidis.

1771 AD Bedagh Beg, one of the Yezidi leaders from Sheikhan, revolted against the Ottoman mayor of Mosul because he sought to convert the Yezidis to Islam. The Mosul Mayor allied with Bairam Beg, a Moslem Kurdish leader, to kill Bedagh Beg and most of his men.

1774 AD The Ottoman Mayor of Mosul, Sulaiman Oash, attacked the Yezidis in the Sinjar area. The Yezidi villages were looted and destroyed.

1779 AD The Ottoman Mayor of Mosul sent more military units into Yezidi territory of Sinjar. They looted and destroyed the villages and killed many Yezidi.

1785 AD The Ottoman Mayor of Mosul, Abdel Bagi, attacked the Yezidis in Sinjar to punish them. The Moslem soldiers were at first defeated, but then they allied with some Arab forces and routed the Yezidis.

1786-87 AD Yezidi ruler Cholo Beg and his forces went to war with the Moslem Kurdish leader of Imadiyah. Cholo Beg lost the battle and many Yezidis were killed.

1789-90 AD Ismael Beg, the Prince of Imadiyah, killed Cholo Beg and replaced him on the Yezidi throne with one of his relatives, Khanger Beg.  When Khanger Beg retired soon afterwards, Hassan Beg, the son of Cholo Beg, was crowned in his stead. Hassan continued the rebellion of his father by revolting against the Imadiyah Prince Kifbad, during which soldiers from both sides were killed in great numbers.

1794 AD The Ottoman Mayor of Mosul resumed the attack on a village in Sinjar called Mehrcan to punish the Yezidis. But he failed and lost the ensuing battle.

1795 AD The Ottomans sent Sulaiman Pasha to Sinjar’s Yezidi villages. With the help of the Kurd Prince Abdullah Beg Kahin and the Abdulrahman Pasha Prince of the Sulaimania Kurdish government, he looted, incinerated, and completely destroyed the Yezidi villages. He also abducted and kidnapped 60 Yezidi women and 650 domestic animals.

1799-1800 AD The Mayor of Baghdad, Abdul Aziz Beg Al-Shawi, destroyed 25 Yezidi villages in the Sheikhan region. Both women and children were abducted and 45 Yezidis were executed. Their heads were then brought to Baghdad as symbols of victory.

1802-3 AD The Mayor of Mosul, Ali Pasha, brought the administration of the Yezidis in the Sinjar region under his strict control. In doing so he found it necessary to attack some rebellious Yezidis from the north while overseeing an Arab raid on them from the south. The attack lasted for several months, during which several Yezidi villages were razed. The surviving Yezidis agreed to accept the rule of Ali Pasha even though they were forced to convert to Islam. When more Yezidis rebelled in 1807 the battle was resumed and 50 Yezidi villages were destroyed.

1809-10 AD The Ottoman Mayor of Baghda attacked the Yezidis in Sinjar. His army looted Sinjar, Mehrkan, and other Yezidi villages. Many Yezidis lost their lives.

1832 AD Bader Khan Beg, the Moslem Kurdish Prince of Botan, tortured and killed the Yezidi leader Ali Beg. The Muslim Kurds then committed an unprecedented massacre of thousands of Yezidis while destroying their villages. Many Yezidis tried to escape by traveling across the Tigris River. Most of them could not swim and were either drowned or captured. Those that were captured were given the option of converting to Islam or dying as martyrs.

1833 AD The Kurdish ruler of Rawandez attacked the Yezidis at Aqra in accordance with a religious mandate from Mulla Yahya Al-Muzuri, a Kurdish Moslem leader. Five hundred Yezidis were killed in the upper Zab region. The Sinjar area was also attacked with many Yezidi lives lost.

1892 AD The Yezidis were attacked by the Ottoman leader Omer Wahbi Pasha. He gave the Yezidis the choice of converting to Islam or paying higher taxes, or death. The Yezidis resisted and Omar Pasha, in alliance with the Moslem Kurds, attacked the Yezidis in the Sinjar and Sheikhan regions. About 15,000 Yezidis were either killed or forced to accept Islam. The Pasha then attacked Lalish and the tomb of Sheikh Adi, carrying away to Mosul the sacred relics of the Yezidis. For seven years following this time the Lalish pilgrimage sanctuary was used as a Moslem school.

1906 AD The Mayor of Mezory, Mr. Saddeq Al-Dammalogi, received an order from the Mayor of Mosul to remove all Yezidis from Lalish and use the temple there as a Muslim school. The Yezidis were persuaded to leave Lalish for one year.

1914-17 AD During the First World War the Yezidis assisted more than 20,000 Armenian people who fled from the Ottoman Turks.

All these anti-Yezidi activities – and many more – have been documented by Islamic authors.

With sincere thanks to Ali Seedo Rashi, President – Yezidi Cultural Association in Iraq for his source article: “The Yezidism”. 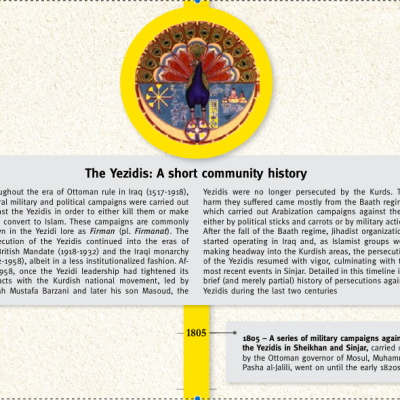 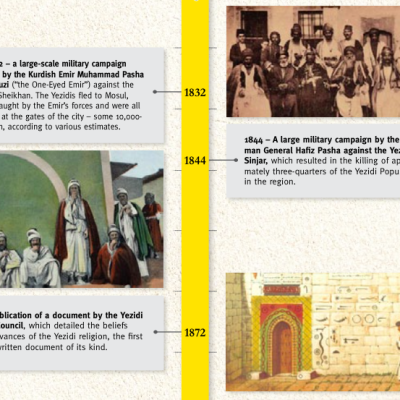 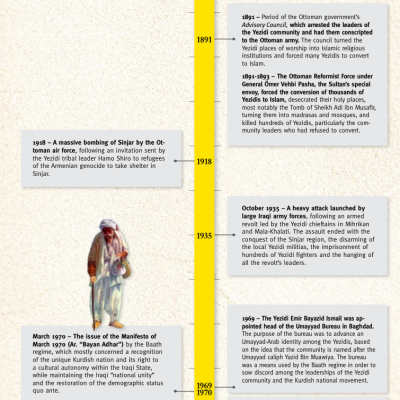 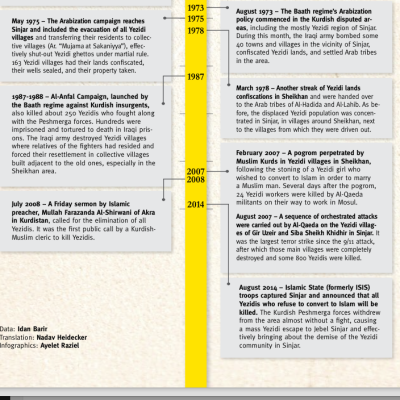