About the Yezidi People عن ألإيزيدية

“When you kill someone, you kill yourself”

Who Are the Yezidis?

The Yezidis (Yazidis) live principally in northern Iraq. There are approximately one million people worldwide. Historically, the Yezidis lived primarily in communities in locales that are in present-day Iraq, Syria, and Turkey, and also had significant numbers in Armenia and Georgia. However, events since the 20th century have resulted in considerable demographic shift in these areas as well as mass emigration. As a result, population estimates are unclear in many regions, and estimates of the size of the total population vary.

The bulk of the Yazidi population lives in Iraq, where they make up an important minority community. Estimates of the size is about 500,000. They are particularly concentrated in northern Iraq in the Nineveh Province. The two biggest communities are in Shekhan, northeast of Mosul, and in Sinjar, at the Syrian border 80 kilometres (50 mi) west of Mosul.

In Shekhan is the shrine of Sheikh Adi ibn Musafir at Lalish. During the 20th century, the Shekhan community struggled for dominance with the more conservative Sinjar community.

Yezidis in Syria live primarily in two communities, one in the Al-Jazira area and the other in the Kurd-Dagh. Population numbers for the Syrian Yezidi community are unclear. In 1963, the community was estimated at about 10,000, according to the national census, but numbers for 1987 were unavailable.There may be between about 12,000 and 15,000 Yezidis in Syria today, though more than half of the community may have emigrated from Syria since the 1980s.

The Turkish Yezidi community declined precipitously during the 20th century. By 1982 it had decreased to about 30,000, and in 2009 there were fewer than 500. Most Turkish Yezidis have emigrated to Europe, particularly Germany; those who remain reside primarily in their former heartland of Tur Abdin.

Population estimates for the communities in Georgia and Armenia vary, but they too have declined severely. In Georgia the community fell from around 30,000 people to fewer than 5,000 during the 1990s. The numbers in Armenia may have been somewhat more stable; there are around 40,000 Yezidis still in Armenia. Most Georgian and Armenian Yazidis have relocated to Russia,[9] which recorded a population of 31,273 Yazidis in the 2002 census.

This mass emigration has resulted in the establishment of large diaspora communities abroad. The most significant of these is in Germany, which now has a Yezidi community of over 30,000. Most are from Turkey and, more recently, Iraq and live in the western states of North Rhine-Westphalia and Lower Saxony.

Since 2008 Sweden has seen sizable growth in its Yazidi emigrant community, which had grown to around 10,000,   and a smaller community exists in the Netherlands. Other diaspora groups live in Belgium, Denmark, France, Switzerland, the United Kingdom, the United States, Canada, and Australia; these have a total population of probably less than 5,000.

They are mostly a poor and oppressed people, but they have a rich spiritual tradition that they contend is the world’s oldest. They were the first people to be created in the Garden of Eden, which they claim is a large area centered in what is now known as Lalish in Iraq. A vestige of the Yezidis’ Garden of Eden era is reputed to be GobekliTepe, a recently discovered archaeological excavation in southern Turkey that has been dated to approximately 12,000 BCE.

During and after a great flood around 4000 BCE, the Yezidis dispersed to many countries in  Asia, including India, Afghanistan, Armenia, and Morocco and possibly India. Returning from their adoptive countries around 2000 BCE the Yezidis played an important role in the development of the Assyrian, Babylonian and Jewish civilizations of the Middle East. Ultimately, the Yezidis amalgamated elements of all these civilizations into Yezidism, including certain features of the Zoroastrian religion of Persia.

How You Can Support Yezidis International Instantly

According to Eszter Spat in The Yezidis, the name is derived from ezXwede dam, meaning “I was created by God.” Some Yezidis maintain that it translates as “Followers of the true path.” The term Yezidi or Yazidi is also very close to the Persion/Zoroastrian word Yazdan, meaning “God“, and Yazata, meaning “divine” or “angelic being“.

For this reason scholars have theorized a Persian origin for the Yezidis. Other scholars have associated the name Yazidi with Yazid bin Muawiyah, a Muslim Caliph ofthe early Umayyad Dynasty. According to the current Yezidi belief, however, the Caliph Yazid was a Muslim ruler. The ignorance on who Yazid was, was also the reason for much of the Yezidis’ suffering throughout Middle East. Although there are similarity in the spelling of the word Yazid and Yezidis one has nothing to do with the other. The relation of one to the other ends at the few letters that both words have in common. Yazid was the son of Muawiya, a Muslim person. He was a caliph from the year 680- 683 and was the cause of the tragedy in Karbala. He was the cause of Imam Husein’s beheading and many Muslims point at Yezidis (the religious minority group in Iraq) as the group to blame. Their evidence? Similarity in the writing and pronunciation of the name Yazid and Yezidis.

Even with all of their ostensible connections to other faiths, the Yezidis have for hundreds of years been under constant attack from Muslims who promulgate the idea that the Yezidi’s principle diety, TawsyMelek, the “Peacock Angel”, is Satan. Muslims also contend that the Yezidis are not “People of the Book”, i.e., that they don’t have a sacred revealed scripture like the Holy Bible or the Koran at the center of their religion, so they claim justification in their massacre of them.

Or even worse, Some Muslims have pronounced the Yezidis as heretics who were once orthodox Muslims – an allegation that puts them in the lowest rung of humanity. Over the course of 700 years, nearly 23 million Yezidi people have been murdered, thus bringing their civilization to the brink of extinction.

Demographic of Yezidi Community- click on the image to enlarge it 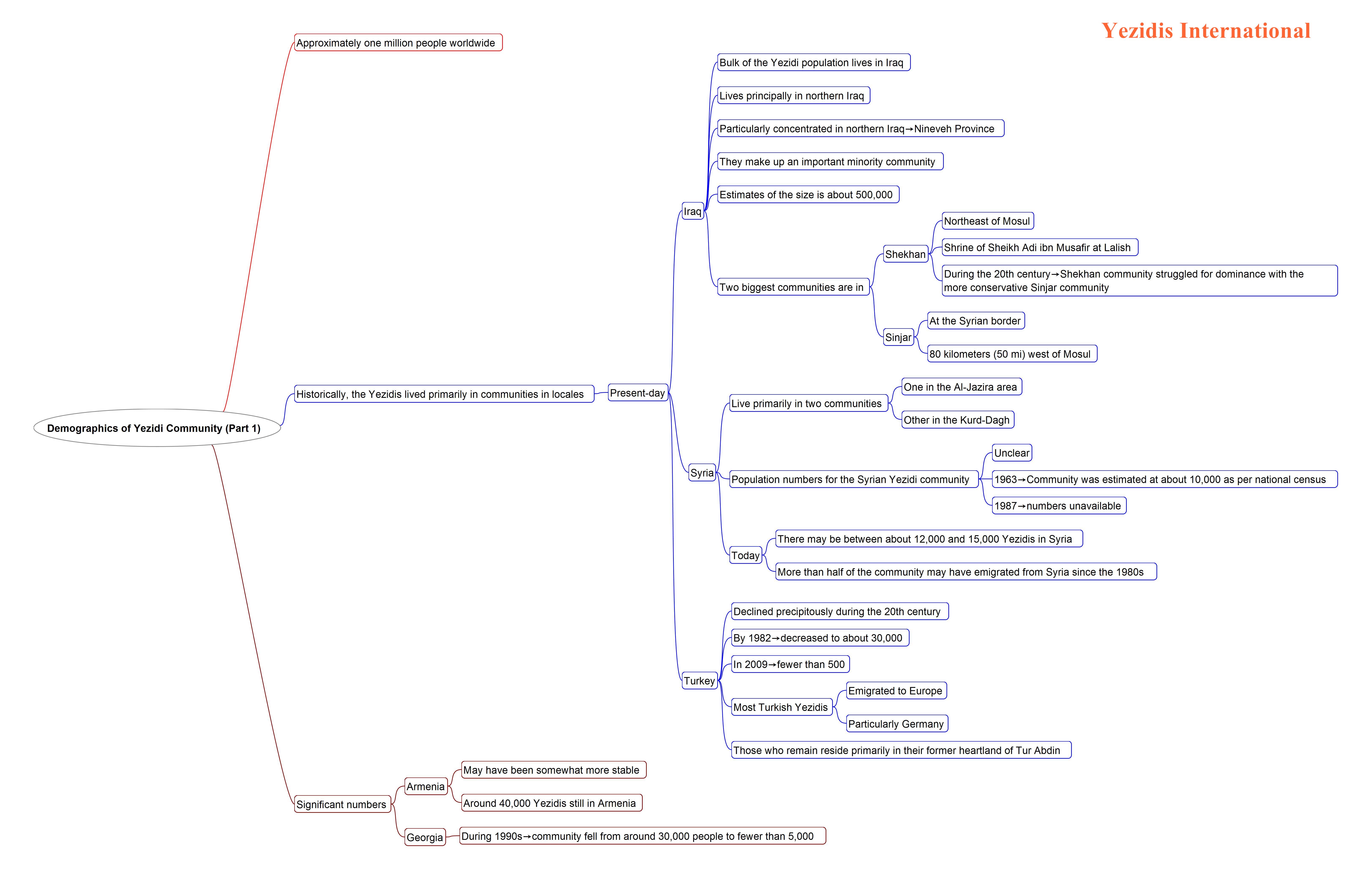 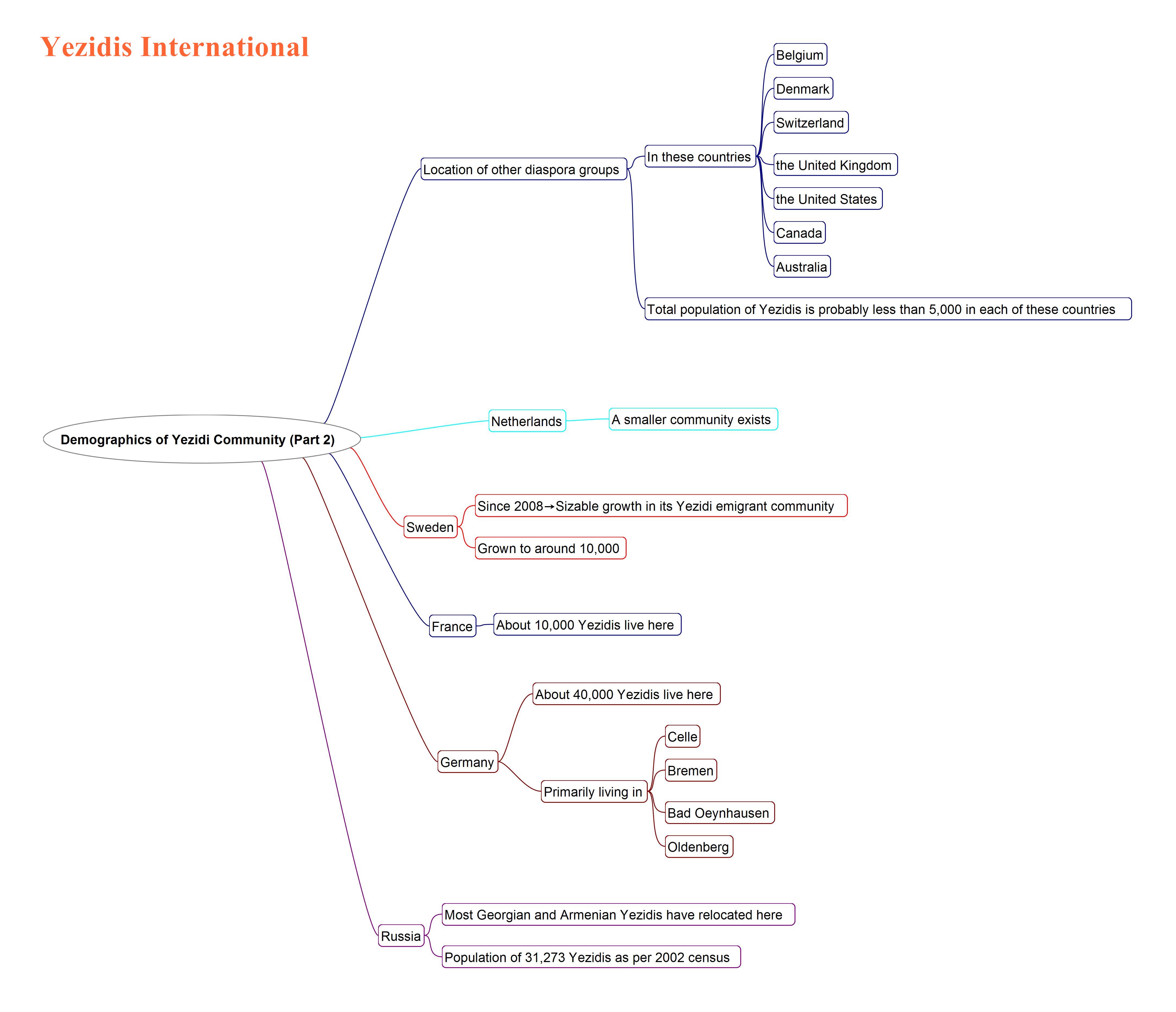